Into the Morgue of Angels Teaser

In the Morgue of Angels 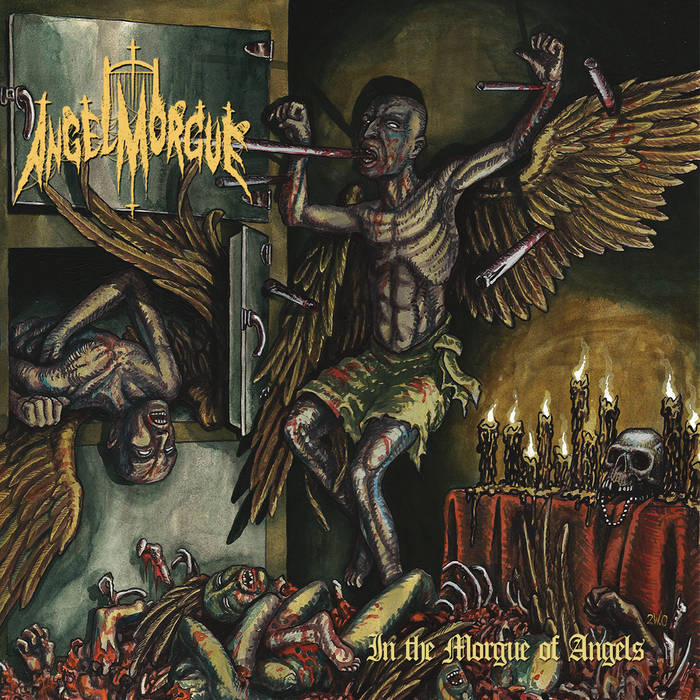 Katimavik86 There's a lot to like about this one. Given a few listens, it really starts to stick with you. Favorite track: The Various Stages of Decomposition.

Shayne Rosenke Raw blackened Deathmetal. grabs you by the throat and doesn't let go till it ends. Best thing to do when it ends is start it all over again. Highly recommended album. Favorite track: Sacrificial War of Death.

tank_06 This is some bad ass, blasphemous shit yo. Production job is superb. Highly entertaining release that will be getting plenty of play. Favorite track: Lust Murderer.

YomaBarr This lies in the spectrum somewhere between Faceless Burial and Sepulchral Curse and soothes and cleanses the tired soul. The more I listen the more essential it gets.
And the cover art kills, not even for the theme, for how it's done.

mbernier71 I love the scathing riffs and the sonic bashing of their songs!! This is a great debut, good job guys!! Favorite track: Cosmic Torment.

Klem Fandango of the Fandango Citadel

"Blasphemy and rotten, cavernous death metal are Angel Morgue‘s specialties on debut album In the Morgue of Angels. The death metal on display is primitive and effective—everything from the riffs to the vocals to the impressive drumming to the production to the song titles sounds like it was dug out of a crypt. Fortunately, that crypt contained an impressive death metal album. From the Immolation-esque “Raped in Church (Touched by God)” to the neck-snapping “Cosmic Torment” and titular closer, Angel Morgue juggle fast and slow tempos, never giving too much of one or the other. There are plenty of sonic similarities to Immolation, Autopsy and early Outer Heaven, and the song titles would bring a smile to Glen Benton’s face. At a lean eight songs, everything about In the Morgue of Angels feels inspired by a time gone by, adapted for 2020. "
- Decibel Magazine
www.decibelmagazine.com/2020/08/03/full-album-stream-angel-morgue-in-the-morgue-of-angels/

"Having established cavernous death metal as the backbone of the song {Cosmic Torment], the band proceed to augment it with other permutations, including grand and gloomy melodic fanfares, shrill spiraling and freakishly swirling leads, vibrant bass pulsations, and changing drum rhythms. At times the song seems like a mad, exultant conflagration. But with a bass-led bridge, the band also take their foot off the gas and convert the music into a titanic lurching and lumbering golem of doom, a wretched shambling leviathan that moans, groans, and oozes sickness and misery. A wailing guitar contributes to the preternatural mood of these monstrous sensations — which well-suit the tale of a priest who has corrupted himself and become an instrument of evil."
- NO CLEAN SINGING
www.nocleansinging.com/2020/06/26/an-ncs-premiere-angel-morgue-cosmic-torment/

"Today you might need something putrid and sickening to wash out your ear canals with filth, so I’m glad to be able to help you out....Right now it’s time for you to bang your head until it falls off the rotting corpse you inhabit!"
- CVLT NATION
cvltnation.com/rotten-blackened-death-angel-morgue/

When it comes to underground death metal, most bands take heavy influences from Immolation, Suffocation, Asphyx, Malevolent Creation, Hate Eternal and Incantation. New Hampshire’s Angel Morgue are on the rise within the death metal spectrum to unleash the dirtiest, filthiest and raw sounding releases that will satisfy any fans of the genre.
- Metal Purgatory Media
metalpurgatorymedia.com/2020/09/18/angel-morgue-in-the-morgue-of-angels/

"A crushing and titanic debut album of nauseatingly heavy material, bringing an apocalyptic vision forth with doomy, blackened and totally ferocious old school Death Metal. Haunting and memorably groovy, there is plenty to love on this record with its demonic, brooding atmospherics and destructive rampages. A must listen for Death-Doom maniacs. -8/10"
- Nattskog
nattskog.wordpress.com/2020/07/25/album-review-angel-morgue-in-the-morgue-of-angels/

"Utter filth. That’s the sound that Angel Morgue can best be described as. Akin to having been dropped into a cesspool of blood, gore and faeces. The slurry thick and sludgy, where staying afloat long enough to get out is near impossible. You can try not to let any of the stinking mess get into your mouth but inevitably you’ll end up choking on it. It’s a waking nightmare caused by the sickening combination of cavernous doom, brutal death metal and hopeless black metal. Topped off with a blatant disregard for those with softer senses and feelings. Be warned, this is not an album to leave you with light and airy thoughts. Instead, it’s an album to drag your mind down into depressing and painful depths."
- Games, Brrraaains, & a Headbanging Life
www.gbhbl.com/album-review-angel-morgue-in-the-morgue-of-angels-redefining-darkness-records/

"The monolithic death metal soundscape is laden with thick morbidly crushing doomy riffs. The sepulchre stenched eerie riffs are the lynchpin of the morbid ravaging atmosphere that engulfs the listener like fungal mould on a cadaver. Through the reeking stench of crawling claustrophobic doom, ANGEL MORGUE will despairing hammer the nail more swiftly into the putrid skin with a full force barrage attack"
- All About the Rock UK
allabouttherock.co.uk/angel-morgue-in-the-morgue-of-angels/

"With In the Morgue of Angels, Angel Morgue deliver a strong, really beautiful and grumpy debut album that musically not only beats everything to pieces, it rolls everything flat and pisses all over it. It is also extremely well-balanced. This is exactly how pure 90’s worship Death Metal has to sound like nowadays!"
- Transcended Music Blog
www.transcendedmusic.de/2020/07/angel-morgue-in-the-morgue-of-angels-recommendation/

"After further desecration and destruction the album ends with a barrage of slamming chords, reluctantly culminating in over one and a half minutes of feedback and reminding the listener that the experience they just had was visceral and memorable."
- Invicta Magazine
invictamagazine.com/review-angel-morgue-in-the-morgue-of-angels-album/

"This is cream of the crop death metal Angel Morgue have mustered and comes off as very boastful given they only have a demo prior to In the Morgue of Angels. Essential purchasing!" 8.5/10
- Metal Bite
metalbite.com/album/39553/angel-morgue-in-the-morgue-of-angels

"At times the vocals also get very deep and cavernous sounding along with the guitar solos and leads being done in a very dark, melodic and old school style as well as the songs also adding in a decent mixture of slow, mid paced and fast parts and all of the tracks also stick to a heavier musical direction. The production sounds very professional while the lyrics cover evil, darkness and blasphemy themes."
- Blackened Death Metal Zine
bringerofdeathzine.blogspot.com/2020/06/angel-morguein-morgue-of.html


Angel Morgue is a 5-piece Blasphemous Death Metal band from Manchester, New Hampshire (US), whose 2017 S/T debut EP caused a bit of a stir in the underground. With a cavernous Death Metal backbone wrapped in a veil of Doom, the band weave in fibers of Black Metal that make up their own unique brand of hopelessness. Angel Morgue proudly reference their major influences as Immolation, Incantation, and Desolate - and you can tell! The band expertly conjured the evil tonality and aggression that makes Death Metal so damn infectious. Obedience through volume is their mission.

Bandcamp Daily  your guide to the world of Bandcamp